- February 27, 2013
Back in 2010 I did a post about unhealthy cereals here. They were cereals most people thought were good for you but really weren't. Now I want to share this new list I saw on Yahoo about snacks you think are healthy but some really aren't healthy for you. 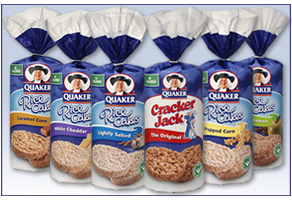 Snack #1: Rice cakes This once uber-popular "diet" snack has a mere 35 calories, but consists of high-glycemic, puffed-up white rice with a low nutritional profile. "They're mostly made of air," says Sharon Palmer, R.D., a dietician and author of "The Plant-Powered Diet: The Lifelong Eating Plan For Achieving Optimal Health, Beginning Today." "You're better off choosing a low-glycemic snack that keeps you feeling full longer."
Verdict: Ditch it. "You want to get as many nutrients as you can with your calories," Palmer says. "You can enjoy a cup of fresh strawberries for those same 35 calories and you'll get more flavor and nutrients."

Snack #2: Kale chips The latest "it" snack is a mixed bag, nutritionally speaking. While kale itself is rich in vitamin A, C and K, your bag of kale chips may contain more additives than you'd think. "With oils, flavorings and salts, some kale chips contain as many calories as potato chips-160 calories per ounce-and loads of salt," Palmer says. "Also, some veggie chips contain nothing but dehydrated potatoes and tiny amounts of dehydrated vegetables."
Verdict: Ditch it and make your own. Roast kale with a small amount of olive oil and seasonings to get the maximum benefit. Or if you're going to buy kale chips, look at the label and make sure kale is listed as the number one ingredient. Snack #3: Sweet potato chips If you think that swapping regular spuds for sweet potatoes would be a healthy upgrade-you'd be right. Sweet potatoes contain more fiber and vitamins A and C than regular potatoes. Just be sure to read the label of those sweet potato chips you're snacking on to make sure you're not getting some unwanted ingredients. "These chips should contain only sweet potatoes, vegetable oil, salt and maybe some seasoning," says Rachel Begun, a registered dietitian and spokesperson for the Academy of Nutrition and Dietetics.
Verdict: Stick with it.

Snack #4: Protein bars Just because protein bars are stocked in the health food aisle, doesn't mean they're any better for you than a Snickers bar. "Most protein bars on the market are glorified candy bars, with chocolate coatings and lots of added sugars and processed ingredients," says Begun. "Consider a protein bar something that should be eaten on occasion as a convenience food when other options aren't available."
Verdict: Ditch it-unless you're in a pinch. 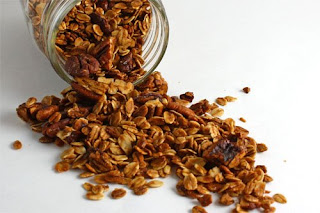 ﻿Snack #5: Granola For years, granola has been portrayed as a health food, but it's actually loaded with calories and fat. "Most people don't realize that a quarter-cup of granola contains up to 149 calories," says Gina Keatley, a chef and nutritionist in New York City.
Verdict: Ditch it. Although granola has heart-healthy whole grains that can help lower cholesterol, it's not a low-calorie option. 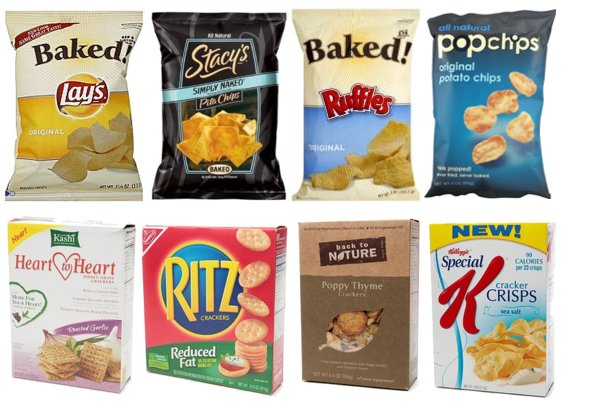 Snack #6: Baked chips and crackers Just because a chip is labeled "baked" doesn't make it better for you. For example, baked potato chips often contain cornstarch and added sugar. "These products are very processed and tend to be high in calories, fat and sodium," says Keatley.
Verdict: Ditch it.

Snack #7: Popchips When you 'pop' a snack, you skip the frying or baking process. Although Popchips are low in fiber, they have zero trans fats, 0 to 0.5 grams of saturated fat (depending on the flavor) and are lower in calories per ounce than traditional chips, notes Lauren Schmitt, a registered dietitian in Studio City, C.A.
Verdict: Stick with it-but watch your portion sizes. "Popchips are a better crunchy snack than a bag of Doritos," Schmitt says. "Still, I'd prefer to see people snacking on non-fat Greek yogurt or low-fat string cheese."

Snack #8: Rice crackers For people with gluten allergies, rice crackers are a great option, according to Schmitt. "Rice crackers have little-to-no saturated fat, so they're healthier than other snack foods," she says. The downside: They're essentially all carbohydrate with very little fiber.
Verdict: Ditch it. If you don't have wheat allergies, opt for a multi-grain cracker and pair it with a hummus, bean or yogurt dip.

Soo..how'd you fare? See any of your favorites on the list?

LadyNgo said…
Healthy snacks are fruits and vegetables. Most things people consider healthy are just "healthier" than what they are already eating. And some things people are just confused about. Old school granola and protein bars are/were meant for people who need a boost while they hike, work out, etc. Not for a healthy snack at your desk lol. Anywho, back to this brownie i'm munching on... lol j/k
2/28/2013 11:48 AM

Anonymous said…
So not true to call them unhealthy. many of these items, like granola, are actually fantastic food. Perfect for breakfast. Your body needs its 2000 kcal a day. plenty of room for a cup granola (300calories).
Now when you think of snacks, a quick fix in the middle of the afternoon, it's certainly better to eat an apple than a cereal bar, especially if you already had a portion of cereals in the morning. But please dont condemn this food like if it was fried mac'n'cheese balls.
4/02/2014 10:05 AM

"The friendship is the most important part of being FWB tbh. That’s why it’s friends with benefits not benefits with friends. Think about it"

Now, the person was being cheeky but I had responded before I realized that.

So my thoughts on this.

The misleading thing about that title is thinking the person you are getting and giving benefits to is your friend. Now granted, we all define friends differently but once you get into a casual situationship or situation where you are just scratching each others itch then something about the friendship is pushed to the bottom, it's no longer a friendship but now a sexual understanding/arrangement.

It shouldn't be explained but I feel I have to. Whenever opinions are made it is not always fact and does not always apply to every single situation. In this case if this goes on for a long time without evolving to a relationship this is what I am referring to. A FWB situation.

- October 09, 2012
In a conversation with a friend of mine, she told me about the three levels of the human brain. I was fascinated by it. She sent me some things and I went to the all knowing google to read some more about it.

So basically, the human brain consists of 3 layers:


The Reptilian Complex - This is the most fascinating of the 3 layers to me. The reptilian brain is also called the Lizard brain and likened to reptiles. It is the first and earliest brain to form. If a child does not receive a lot of love and security growing up, this will be the brain they will use most often and always  default to it. This part of the brain is the one that deals with basic survival, instinctive and reproductive functions. These are also known as the 4 F's. The 4 F's are - Feeding and Fucking, Fight or Flight. People who operate mostly on this brain are very defensive. When operating in that brain level, the frontal lobes which is the thinking brain that process and analyze shut down. These people can be…
Read more

I am going to be hella random. How is everyone doing? Is your year going well? Do you feel as hopeful as you did the beginning of the year?

How are we feeling about the democratic party and the debates? I have caught a few and honestly I want to be optimistic but man, I just think he is going to get four more years.

Which do you think America is ready for first - a gay president or a female president?

Till today I will never not be in awe that America voted a black President - twice. Like the first time okay, but in retrospect how did Obama beat McCain that seems to be the epitome of everything America loves.

Obama scares me a bit. Noone is that perfect and his whole story was just easy breezy relatively.

Everyone is crazy about Love is Blind on Netflix. If you don't know about it, welp. Get to know more about it here.

Lent is here again. Once again, I implore people to not low key use it as a diet plan and try to add and improve …
Read more